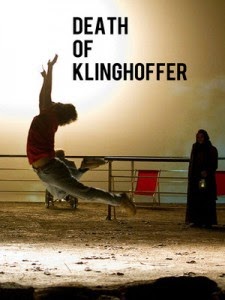 Yesterday, I wrote about a church burning in Rochester, NY that could not derail a faith community or the steady progress of integration. I was glad to have that in mind when I opened Phyllis Chesler’s excellent critique of the  Metropolitan Opera in New York’s performance of Death of Klinghoffer.

It’s been argued that the production is not anti-Semitic, but the very timing of its revival argues otherwise. In August of this year, the Guardian reported:

In the space of just one week last month, according to Crif, the umbrella group for France's Jewish organisations, eight synagogues were attacked. One, in the Paris suburb of Sarcelles, was firebombed by a 400-strong mob. A kosher supermarket and pharmacy were smashed and looted; the crowd's chants and banners included "Death to Jews" and "Slit Jews' throats". That same weekend, in the Barbes neighbourhood of the capital, stone-throwing protesters burned Israeli flags: "Israhell", read one banner.

In Germany last month, molotov cocktails were lobbed into the Bergische synagogue in Wuppertal – previously destroyed on Kristallnacht – and a Berlin imam, Abu Bilal Ismail, called on Allah to "destroy the Zionist Jews … Count them and kill them, to the very last one." Bottles were thrown through the window of an antisemitism campaigner in Frankfurt; an elderly Jewish man was beaten up at a pro-Israel rally in Hamburg; an Orthodox Jewish teenager punched in the face in Berlin. In several cities, chants at pro-Palestinian protests compared Israel's actions to the Holocaust; other notable slogans included: "Jew, coward pig, come out and fight alone," and "Hamas, Hamas, Jews to the gas."

“The former mayor [Rudolph Giuliani] had a history of challenging cultural institutions when he disagreed with their contents – I don’t think that’s the American way. I think the American way is to respect freedom of speech, it’s as simple as that,” said current New York Mayor Bill De Blasio, repeating a canard that’s gotten amazing traction in this debate.

This is not a free speech issue. Nobody has ever suggested governmental censorship. It’s a matter of abdicating artistic responsibility.

The Met has been suffering from declining attendance. They have a rising, multimillion-dollar deficit and labor problems. This is their version of Janet Jackson’s wardrobe malfunction, a desperate bid for attention.  But we've had fifty years of pop stars being increasingly outrageous to get us to notice them. There’s very little civility left under our culture.

It’s a purely modern problem. Even in the dark days of the 1930s (when the Nazis had supporters throughout the west) this opera wouldn’t have been mounted in Cedar Rapids, Iowa, let along New York, which is home to the second-largest Jewish population in the world.  But despite it being very much our zeitgeist, serious artists ought to eschew outrage marketing.

“Would the Metropolitan Opera offer a work called ‘The Death of Martin Luther King Jr.’ with racist views in support of the assassination?” asked the Wall Street Journal. How about an opera that glorified the killers of Matthew Shepard? No, because even wardrobe malfunctions have their limits.

Message me if you want information about next year’s classes and workshops.
Posted by Carol Douglas at 3:52 AM