We're offering three workshops for 2020, at Acadia National Park and aboard the schooner American Eagle. Register before January 1 for an Early Bird Discount!

A great master is censored in Manchester 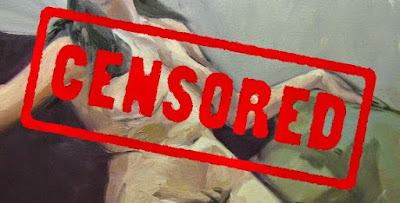 This morning, I’m heading down to Boothbay Harbor to deliver two nudes to What’s Nude in Boothbay Harbor at Studio 53. These belong to a body of work I did for a duo show with Stu Chait at Rochester Institute of Technology’s Dyer Gallery in 2014. The show was closed after administrators took a gander at my nudes.
I felt badly for Stu, but it did give me the experience of being censored. Today, I’m joined by the illustrious Victorian painter, John William Waterhouse, whose Hylas and the Nymphs has been removed from the walls of Manchester Art Gallery. As usual, the administrators have put the best possible face on it, making the painting’s absence a ‘dialogue’ and asking patrons to comment on Post-It notes pinned up in its space. That’s a clever trick. You can’t write much on a Post-It note.

Curators explained that this was being done in connection with a current debate on historical cultural depictions of submissive women, calling the painting a “Victorian fantasy.” If that’s their criteria, then all their pre-Raphaelite paintings are destined for the dustbin. The pre-Raphaelites are the heart of Manchester's collection. They’re unlikely to burn any of them as zealots did during the Protestant Reformation; they’re too valuable. Still, it’s a worrisome trend, in part because it’s so uninformed.

Hylas is a character from Greek mythology. He was Heracles’ youthful spoil of war, lover, companion, servant and fellow Argonaut. Hylas was kidnapped by nymphs—who are neither human nor prepubescent—of the spring of Pegae, Dryope. Broken-hearted Heracles and his pal Polyphemus went off to find him. The Argo sailed on without them. Heracles never found Hylas, who was blissfully happy in his spring with his nymphs. The story has been retold in art since about 300 BC.

Unlike Balthus, there is no indication that Waterhouse had any improper relations with his models. He was a quiet, private man who was married to a woman he met at his parish church in Ealing. He died after a long, suffering illness with cancer, in 1917.

We have little information about his models for Hylas, but we do know something about the women who sat for him. His sister Jessie is believed to be among his first models. His sister-in-law, Mary Waterhouse Somerville, posed for The Lady of Shalott in 1888, and his wife Esther also sat for him.

Muriel Foster first modeled for Waterhouse in 1893 at the age of fifteen, decorously draped in a long gown as La Belle Dame Sans Merci. She was probably one or more of the nymphs in Hylas, although the nymphs are pastiches of different faces and forms. She sat for Waterhouse until his death.

Gwendoline Gunn was the daughter of the Waterhouses’ friends, Marcus and Mary Eliza Gunn. She modeled for him in the early 1900s, but more importantly, became a friend of the artist and his wife in her own right. She and her daughter took care of Esther Waterhouse until her death in 1944.

Waterhouse also worked with the same stable of professional models as used by his pre-Raphaelite peers. Many of them were notorious for their intimate relationships with their models, particularly Dante Gabriel Rossetti.

So why Waterhouse?
Posted by Carol Douglas at 4:56 AM