Monday Morning Art School: how to draw windows and doors that fit

The South sure loves its Greek Revival pillars, doors and windows. Here’s a little trick to draw them evenly.
The South also observes Blue Laws. That meant I wasn’t able to get a replacement sketchbook at Hobby Lobby yesterday. I drew these on tissue paper; the quality is terrible.

Earlier, I taught you how to draw a door in basic perspective. The door makes a shape called a trapezoid. (Don’t be frightened; that’s as mathematical as we’re going to get here.) When drawing buildings, most people get basic two-point perspective right but then mess up in spacing windows and doors. Here’s a technique you can use to divide the face of any building into regular units, no matter what angle you are looking at it from. 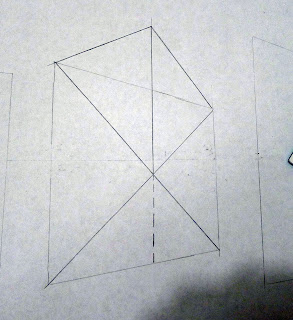 Just draw an X from corner to corner. The vertical line that runs through the middle of this X is the center of your building. This is very useful for buildings, because if there’s a pitched roof, it almost always comes down from that center point. 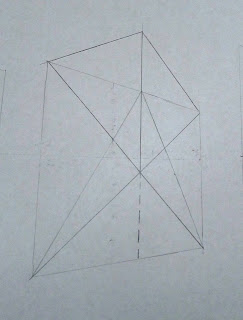 Do the same thing, upside down, so that you have a six-pointed star. 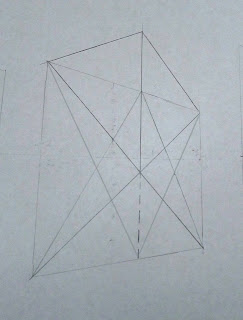 The points where the lines intersect are the thirds. 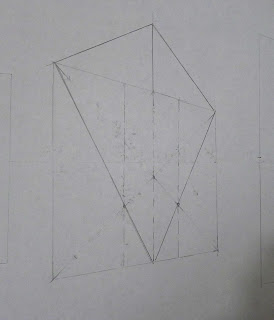 This requires that you figure out the middle of one side of your trapezoid. Then draw a line between it and the middle-point. Now you have the horizontal center-line. It will not be level; it should hit both sides at the mid-point. 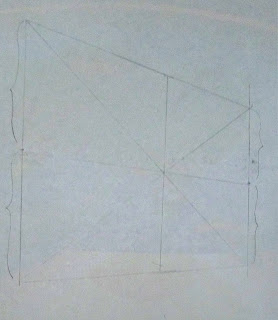 Draw your star-shape again. The points where it intersects the center line are the quarters. 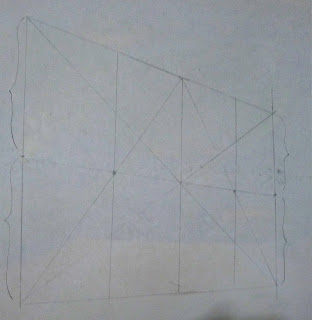 This is the most complicated and fun of the divisions. Start with a horizontal center-line as you did above. 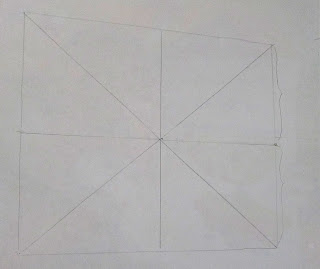 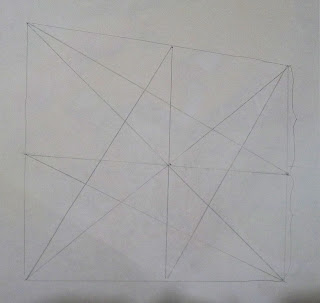 The points where those diagonals meet are the 1/5 divisions. 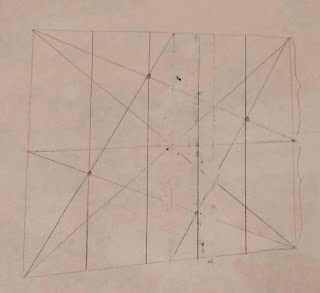 In practice you can divide and subdivide these units to figure out the placement of windows and doors pretty quickly. Here is my division of Siloam Baptist Church, above (yes, the bottom line was wrong; I fixed it after I took this photo): 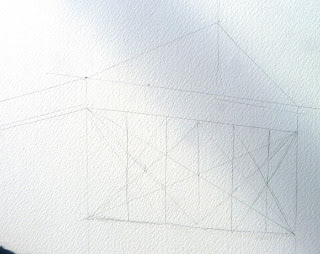 And here is a fast division of my first drawing. I just broke the units I had into smaller ones using the same principles: 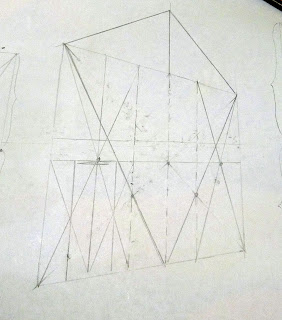 Which I then extrapolated into this purely imaginary facade of a house: 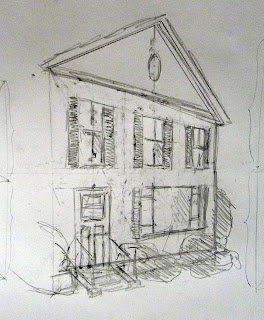 I didn't do any of this with a ruler, but with another piece of paper as a straight-edge. Once you learn these divisions of space, they take only seconds to do. They are much easier than guessing and erasing.
Posted by Carol Douglas at 5:37 AM

I wish I were still teaching geometry. This would be a fun activity day, with bonus points to the students who chose to do informal proofs for each.

"Math" is a dirty word to some artists, who don't realize they use it every day.

So it will be our little secret. 😉

All Hobby Lobby locations across the U.S. are closed on Sundays. Love this article.