A roadmap to my party

This was sent to me by children’s book author and artist Bruce McMillan, who noted that my December 7 Open House and Studio Party celebrates painter Stuart Davis’ 125th birthday (December 7, 1894).

If going to the Open House make sure to gas up for the trip. The ghost of Stuart Davis may be going with you.
Make sure you drive to Rockport ME and not Rockport MA. Oh ME, Oh MA!
Go past the yellow house; there has to be a yellow house somewhere along the drive. [Editor’s note: it’s next door.]
"Davis and his family first went to Gloucester in the summer of 1915, attracted by John Sloan's enthusiasm. Eventually, his parents acquired a house on Mount Pleasant Avenue, where both Davis and his sculptor mother kept studios; over the next twenty years Davis would spend extended periods on Cape Ann. Gloucester imagery would permeate almost all of the work of this avowedly-urban painter for years to come, but if the accoutrements of the working harbor held a lifelong fascination for him, the particulars of Gloucester space and geography were crucial to his early evolution." (Stuart Davis: A Catalogue Raisonné, vol. I, New Haven, Connecticut, 2007, p. 55)

Hope it doesn't snow on Stuart's 125th birthday, that the driving will be clear and dry.
Davis combined the principles of Henri's teaching with the technique and palette of his contemporary and close friend, John Sloan. Davis succeeds in rendering a dreary winter's day in lower Manhattan. With a generous application of whites, Davis works up the surfaces to portray the texture of the snow which is juxtaposed with the more carefully applied reds to develop the architecture in the background. Broad, heavily applied strokes of black are the only device Davis employs to represent the pedestrians with the exception of a few simple touches of orange that delineate the faces of the primary figures in the foreground. Vigorous dashes of greyish-white provide a sense of the blustery, swirling snow, the drama of which is underscored in the foreground figures who are bracing themselves against the elements. Davis employs strong linear perspective to capture the broad avenue and achieves spatial effect by placing two figures in the foreground marking the entry point into the composition. To carefully define the space, Davis uses planar structures along the left side and staggered vertical lampposts and industrial smokestacks to establish depth. Figures are also used to demarcate space intervals in the scene as they are integrated at varying points in the composition.

Don't stop to gawk at or sketch any boats along the way; you'll see boats in Carol's art once you get there.
Hey, skip the boats—really—and head up to heights above the harbor on Route 1.

At last you'll be at the artist's studio… Carol's, not Stuart's.
There will be crowds and crowds, though no servant girls, sorry; it's self-service. What do you think this is? A restaurant?
The Association of American Painters and Sculptors originally planned to exhibit only the work of members and those they invited. However, in response to a growing chorus of queries, they asked interested artists to submit works to the Domestic Art Committee for selection. Davis's work was chosen, and at twenty-one years old, he was one of the youngest artists represented in the Armory Show. In later years, Davis described the 1913 exhibition as a turning point in his artistic development. He called it “the greatest single influence I have experienced in my work,” which prompted him “to become a ‘modern artist.’”

And as the sign says: You Are Here. While everyone wonders, how does Stuart know? 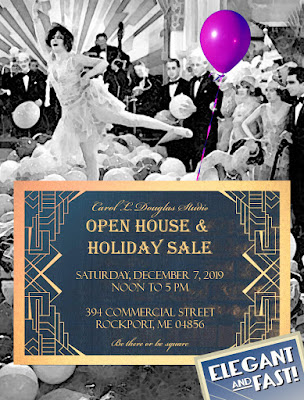 Want to read more of Bruce’s writing? Sign up for his daily postings here. And, my Hidden Holiday Sale has gone public!

Posted by Carol Douglas at 5:04 AM