Meme of the day--Back it up! 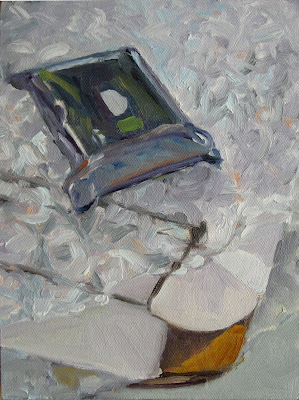 My new hard drive that just arrived in the mail, 6X8, oil on canvas

A note about these still lives: they’re exercises before my “real work”, a sort of a meme-inside-a-meme, considering how popular the painting-a-day movement is. They take an hour, more or less. And I do them because I find the classic still life boring to paint, but it’s too cold for me outside to paint plein air.

I figure by the time spring comes, water reflections will seem awfully simple in comparison to all this plastic wrap, tinfoil and bubble wrap.

Labels: alla prima, Back It Up, Carol L. Douglas, meme of the day, still life 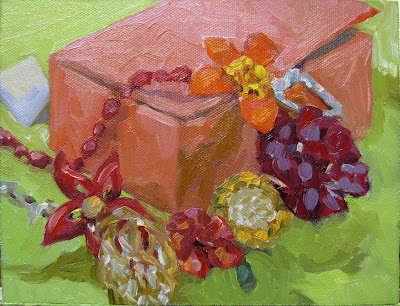 Jennifer Jones' statement jewelry, 8X5", oil on canvas
Still life set up by my student, jewelry designer Jennifer Jones. If you're interested in seeing her work (which really looks better than my still life) see it here.
Posted by Carol Douglas at 3:14 PM No comments:

Neko-nabe, or fat cat in a dish (with notes about how to draw the ellipse of the dish) 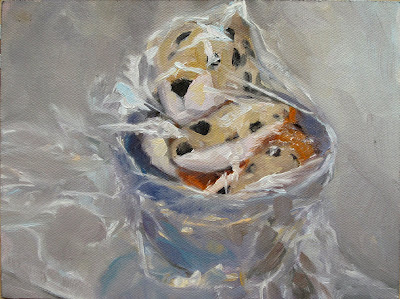 Neko-nabe, or fat cat in a dish, 8X6 oil on canvas

An ellipse is a plane curve with two foci which is symmetrical on both the vertical and positive axes, and intersects with these axes perpendicularly.

I recently heard a student tell another one, “She means not a racetrack and not a football.” Works for me, as long as it’s symmetrical both ways, as below. 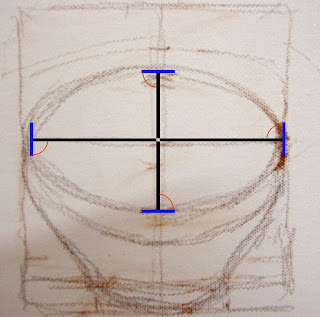 Use that boring old method, a pencil held up in space, to measure the distances above the bowl's ellipse and below it. You'll be surprised at how often the bowl has very little showing below the rim, and a lot above the rim. 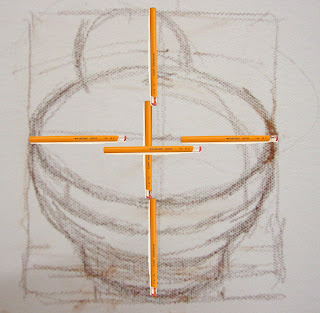 There is nothing like a contour drawing to check your composition. This is not time consuming, but the most important work you can do. The mantra of my studio is, "draw slow, paint fast" (and thank you to Rhea Horowitz for coining that). It's a lot easier to correct mistakes in a pencil drawing than in a mush of paint. 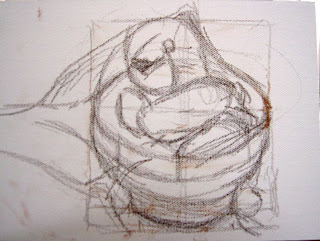 Posted by Carol Douglas at 11:24 AM No comments:

Meme of the day--Ginger is so last year, but so's this purse! 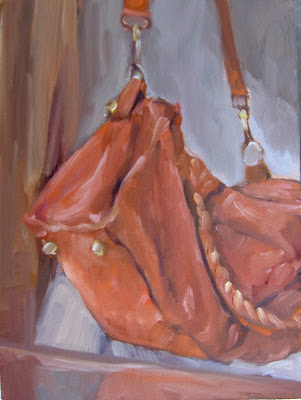 Sandy's ginger purse, which I found lying on the floor, 6X8, oil on canvas
These memes of the day are tiny (6X8) still life paintings, warm-ups for my "real" paintings, and if they take me more than an hour, I get quite grumpy. (Girls, can I send this purse away now, or should it kick around your bedrooms for another few years before being properly buried?)
Posted by Carol Douglas at 10:28 AM 2 comments:

Internet meme of the day--girl falls into fountain while texting 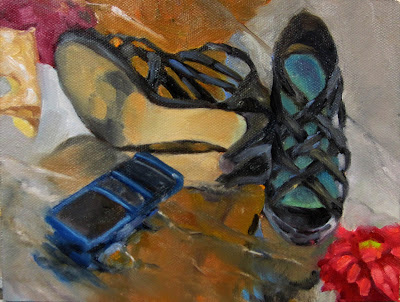 Girl falls into fountain while texting, 6X8", oil on canvas
And the steps to do it, in about an hour:
I start with either a watercolor pencil drawing. Easily erasable with a wet paper towel, allows me to fiddle endlessly with composition. 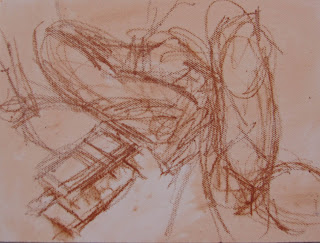 Then I block in colors and values, very roughly. 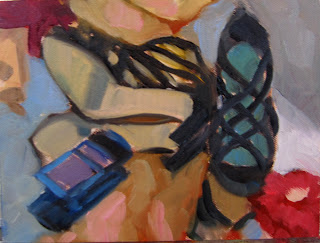 Then these shapes are gradually refined until I have to go pick up my son or yell at the dog or answer the phone.. 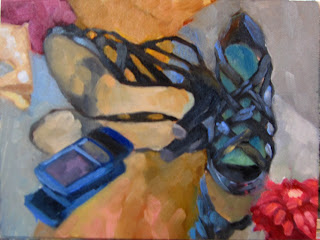 The water reflections were added last. After I raised my phone up on a small support, I poured a pitcher of water over the rest of the stuff.
Posted by Carol Douglas at 4:55 PM 2 comments: 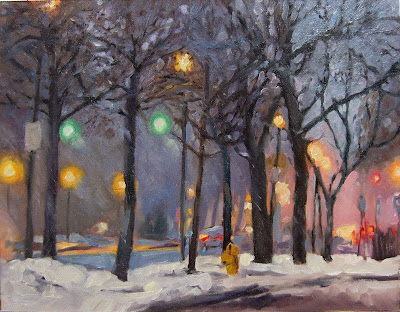 I was waiting for my son at and amusing myself by taking photos of the streetlights with a handheld camera. Never thought of the photos as a painting until it was suggested by my friend Pilan. Here it is in an expanded sketch. 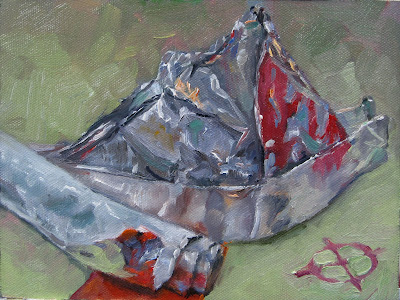 Tinfoil hat, 6X8" oil on canvas
Tinfoil is just not that easy to paint alla prima. This was my second try.
But check out this tinfoil, done with a rather more careful approach, in colored pencil:
http://www.kenygalleries.com/images/ac-tolstedt/tolstedt-bio.html
(BTW, I can make the tinfoil hat itself in less than a minute.)
Posted by Carol Douglas at 2:23 PM No comments:

Baby Monkey Riding On A Pig 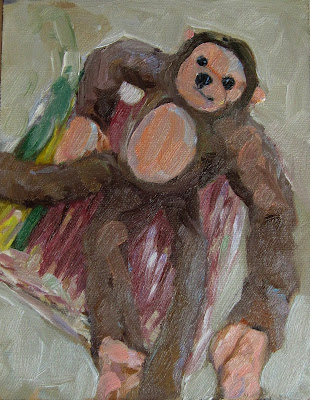 Going backwards on a pig, baby monkey...
Posted by Carol Douglas at 11:59 AM No comments:

Unicorn with double rainbow (for my kids) 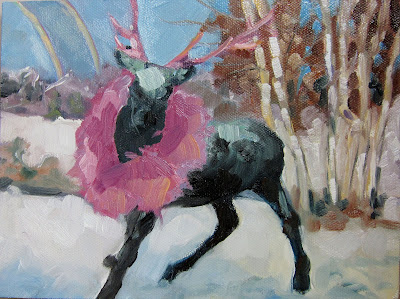 "Unicorn reindeer visiting my front garden with a double rainbow in the background" 8X6, oil on board.
Today for my one-hour still life I returned to an old idea, painting an internet meme. I could find only half the props needed for “baby monkey riding on a pig,” so I fell back on that old standard, “unicorn” and added a newer element, the “double rainbow.” The unicorn is, of course, disguised as a florescent reindeer because I’ve been dying to paint this fellow. 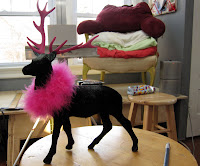 My palette doesn’t have the gamut for his lovely pink mane. Carmine, naphthol red, quinacridone violet, quinacridone rose—none comes close to sufficient saturation. The blacks are much easier—two lights and two darks, warm and cool, covering the various lighting situations in my studio. 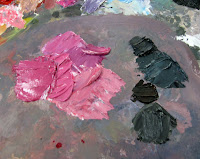 I flipped through my landscape sketches intending to use the first one with sky as the setting. It’s my own front-yard—well, what could be more appropriate? I decided to make it winter, however. 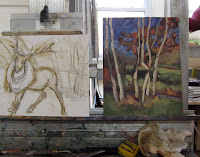 A student left some carbazole violet behind; I did two small sketches in the holiday spirit. 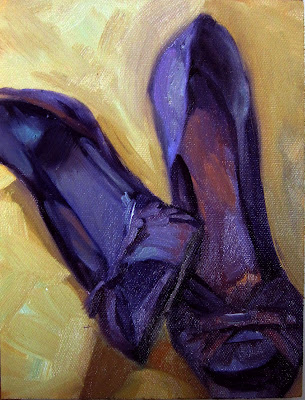 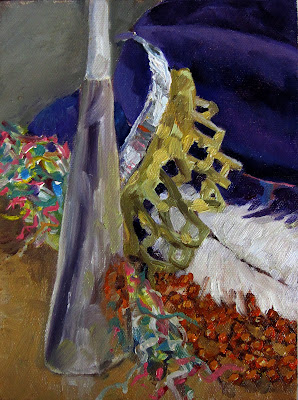 *To answer your questions: Mootsie Tootsies; silk; for a prom; yes, they were on sale at Kohls; they came in black too; no, you can’t borrow them.

Posted by Carol Douglas at 3:22 PM No comments: 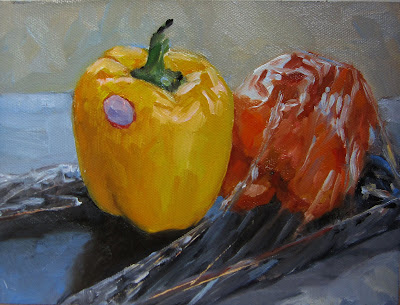 For several years I asked myself when would be a good time to take a sabbatical from career development, to focus only on painting. Economic malaise presents the perfect opportunity, so I took 2010 as a year to pursue intentional isolation. My plan was simple: no marketing, only one show, even less blogging. Instead, I would spend my time in my studio painting and working with those students who were at hand.

The year of stillness is now done, and I am glad of it—both that I did it and that it’s finished.

Some of the risks proved real—for instance, when you stop showing, you stop selling. Students wander off, and if you aren’t looking for new ones, you eventually find yourself pretty lonely. On the other hand, you’re able to look at your own work independent of others’ opinions, and you become very invested in the students you retain.

I’d like to be able to recount some sort of spiritual journey which resulted not only in enlightenment but also in a tidy little book deal, but if that happened, I missed it. On the other hand, I did get much better at sketching every day—especially in church.

I also got into the habit of doing a daily small still life (6”X8”). These are “gesture paintings.” With rare exceptions, they take me 1:20 or less to finish. This is from New Year's Day, 2011—a new year, a new decade, and back to engaging with the world.

Five plein air sketches by a student and friend

Students do wonderful things. Here are five landscape paintings recently entered by in the GVPAP show at Barnes & Noble—all five were accepted. 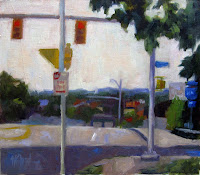 Expressway entrance at South Winton Road, about 12.5X10, oil. (These are not titles, but descriptions, since I don't know the titles.) 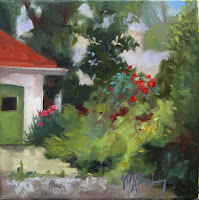 My backyard when the roses were in bloom, about 12X12, oil. 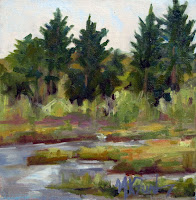 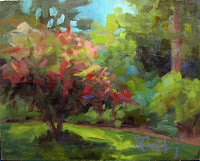 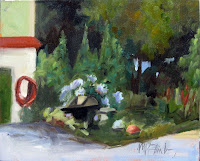 These paintings will be on display in the community room at Barnes & Noble, , through January 27. The reception and awards ceremony will be on Saturday, January 8 from 4 - 6 pm.

Marilyn is certainly talented—no doubt about that. But she brings to mind that famous Thomas Edison quote: “Genius is one percent inspiration and ninety-nine per cent perspiration. Accordingly, a ‘genius’ is often merely a talented person who has done all of his or her homework.”

And on that note, I’m getting to work.