I’ll be presenting the nudes that got me closed down this Saturday, from 4 to 6 PM. You’re invited. 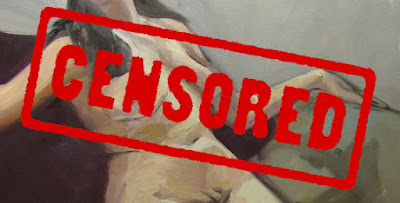 In 2014, I was part of a duo show at a university gallery in Rochester, NY with my pal Stu Chait. Stu was doing large abstract watercolors; I was showing equally large nudes. The gallery is enormous, and our show was equally vast: a body of sixty pieces sprawled across three rooms.

I didn’t think much of about edginess in my own work; after all, my own kids had seen these canvases leaning against the walls of my studio for the year in which the work was produced. But I am not much for coy. My work dealt largely with the marginalization of women, exploring issues like religious submission, bondage, slavery, prostitution, obesity, and exploitation. It was serious, and it got a serious reception, featured in the university news and a city newspaper.

Then, college administrators saw the show and closed it down. The paintings have not been shown as a body of work since.

The cynic in me thinks that if I painted Odalisques there would have been no objection. Young people are exposed to sexually-charged but stupid images every day; in fact, this is part of the problem facing women today.

We’re accustomed to market-driven nudity and violence. Consider Kylie Jenner’s Glosses ads. I’ve seen two versions, both of which feature Kylie and two other barely-clothed light-skinned women killing dark-skinned black men. They’re offensive to many values we like to talk about, but in 2018, Jenner was estimated to be worth $900 million.

We not only tolerate but glorify the cardinal sins: lust, gluttony, greed, sloth, wrath, envy, and pride. On the other hand, we are leery of serious conversations, we don't like serious effort, and we vilify those with whom we disagree.

After years of stepping over these paintings in my store room, I’ve decided to look at them carefully once more. Censored. Me. Really opens this Saturday from 4-6 at Carol L. Douglas Studio, 394 Commercial Street, Rockport. I will give a short presentation on the subject, the process, and the impact of censorship on my work. I hope to see you there.
Posted by Carol Douglas at 4:13 AM