Where the movie "Big" was filmed

I just returned from a week downstate. The culmination of this was the seventh annual “Painters on Location” of the Rye Arts Center in Rye, NY. Last year I was overwhelmed by the landscape, the parking, the driving and the event, yet I had a wonderful time. This year, Daisy dePuthod (see her work here) took me under her wing and with the logistics more manageable, I was able to relax and paint.

The artists’ boards were stamped at 3 PM on Friday, since rain was threatening on Saturday morning. Daisy and I gathered our boards and lunches and headed to the Playland boardwalk. Playland was built in 1927 and is the only Art Deco amusement park left in the United States; it’s a National Historic Landmark. The part on which we painted is a public beach. (To learn more about Playland, see here.) 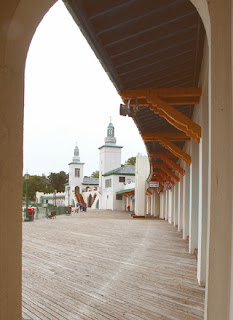 Many people pointed out that the section I chose to paint was
used in a scene in Tom Hanks’ Big. Does this look familiar?

The boardwalk and bathhouse are set on a long curve, which makes for some intriguing arcs. I stood within a stucco arch and focused on the long curving sweep of the roof. Even though the subject of the painting was the bathhouse with its two towers I knew the picture depended on the sweep of the blue roof. 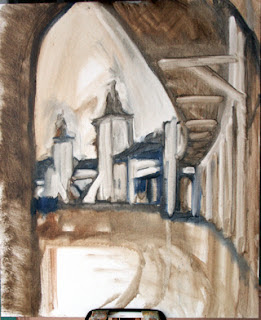 By the time I committed my drawing to canvas, the light was gone. It was a beautiful evening, with lights twinkling along the boardwalk, but useless for painting.

The next morning I arrived in Rye shortly after 6 AM. 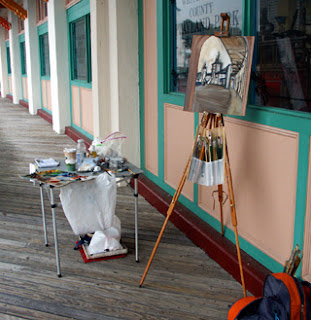 No box easel! I can never find anything in them.

My set-up under an arch was a good idea, for it was rainy, cold and dark. 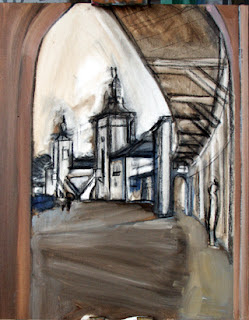 My first task was to refine my drawing in charcoal. Normally, I don’t do much charcoal drawing, but the buildings are complex and I was working fast. 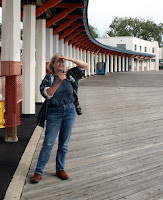 Daisy scoping out the scene... 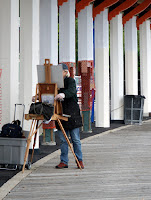 And Daisy painting the scene...

It was hard to choose among the architectural gems in this place... 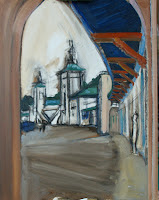 I concentrated on painting the orange beams first because I needed them to be believable. 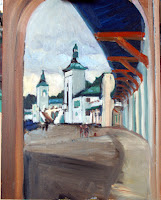 Note that I got rid of the man peering into the Museum windows. I think that was a mistake—he lent good foreground interest. I replaced him with a couple walking a dog—ubiquitous on the boardwalk, but too far away to lend any depth to the scene. 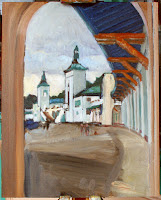 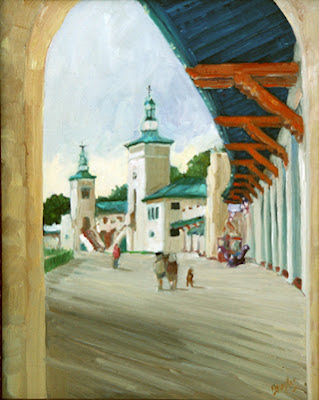 Superb! Great to see how you made this painting step-by-step. It is also nice to read about the choices you hve to make in the process. I really like the result - and you did pick an interesting perspective.
By the way, I wrote about Yom Kippur on my blog - thanks for the inspiration!
Also check the Jews for Jesus blog from Chad - see my blogroll. I am excited about all the background knowledge this Jewish believer in Messiah Jesus has to offer us. Talking about interesting perspectives... ;-)