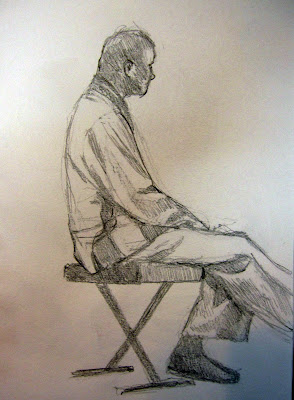 This is the second year I’ve bought into the Sketchbook Project and then felt my muse desert me as soon as the package arrived in the mail. It’s ironic, because I carry a sketchbook everywhere I go, a habit that started in elementary school.

My school notekeeping was a total fail from an academic standpoint—full of drawings, with notes occupying a very minor role. My current sketchbooks look exactly the same.

I now realize that drawing in school allowed me to cope with undiagnosed ADHD at a time when school was extremely regimented and bad behaviour still punishable with a ruler to the knuckles. And I received my share of thwacks for drawing in class, believe me. But as a parent and painting teacher, I encourage both my children and students to do the same thing. Unfortunately, most teachers are still opposed to it.

I know it works (as long as the information being presented is verbal and not visual). For some reason, it’s perfectly possible for the mind to listen, learn and retain a lecture while drawing something entirely unrelated.

For me, drawing takes the place of the anxious fidgeting that is part of ADHD. Educators have begun to recognize that allowing such kids to move paradoxically makes concentration easier. But they don’t generally recognize that drawing can achieve the same goal.

I bring my sketchbook to church, to appointments, on errands—in short, anywhere there’s a possibility I will cool my heels. I make no pretence to style, and don't think about content or composition. (To do otherwise would interfere with my listening.) My goal is simply to record what I see. It’s totally process-based; I never think of the sketches as anything other than practice strokes or visual notes. Which may be why the Sketchbook Project never works for me: it can’t help but turn process into product. 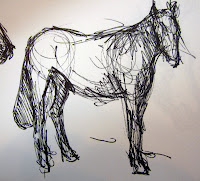 (L-R) In a pinch, you can always draw your own jacket thrown over a chair; couple in church; gesture drawing of horse at Walnut Hill. 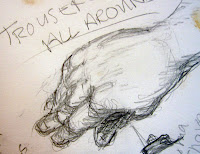 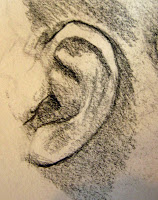 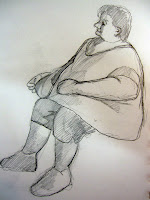 (L-R) Or, you can draw your non-dominant hand; people almost always have a few ears hanging around; patient at the neurologist's office. 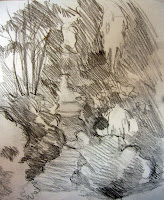 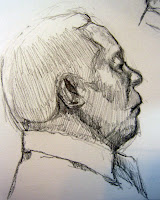 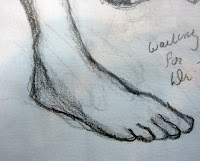 (L-R) Quick value study of a path (I could paint it from this); man in church; my son's big foot, at the pediatrician's office. 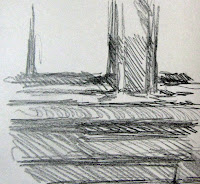 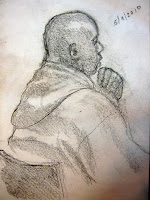 (L-R) I've pretty much mined my dentist's office for subject matter, but there's always the woodwork; poofy gown from a shopping excursion; man in church.
Posted by Carol Douglas at 8:48 AM

Or knitting. I do much better with meetings of most kinds if my hands are engaged... When I was in school, I used to play the piano on the lower level of my desk!

A lot of people use knitting and crocheting for that purpose, G. But for aspiring artists, the business of drawing is vital. Nothing has a greater impact on skill development than facility at drawing.