That wasn't one of my better days 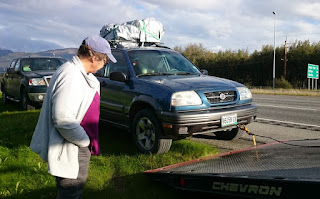 Yesterday was a mixed-weather day, alternating between a fine, misting rain and short bursts of sunlight. Autumn in Alaska is markedly advanced, although they haven’t had what they call “terminal dust” yet in Anchorage. That’s the first snow on the tops of the mountains. The aspens are gleaming yellow against the distant blue mountains, and it’s cold by Lower 48 standards. However, this year I am prepared.
We took the Suzuki out for several short jaunts around Eagle River: to buy camping equipment, to get an oil change, and to the auto-parts store for a set of universal cargo crossbars. The old-timer ran like a champ.
I audited its deficiencies in my head. There was a small chuffing sound on acceleration, but it faded quickly as the car warmed up. I bought a can of gas additive, since the car has been sitting since May. An occasional thud from the back sounded like a stiff rear spring.
There is also a small exhaust leak, and I planned to take the car to a garage in Anchorage this morning. I know the muffler shop; they fixed a sheared bolt on the same car last August. They did a good job at a fair price.
I was fighting a battle with my own impatience. All day I debated whether I should keep that appointment or just leave Anchorage at first light. 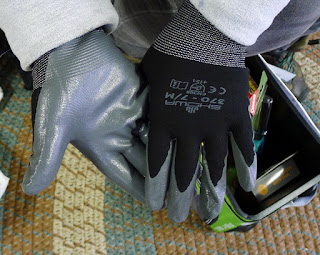 I usually paint in winter in latex gloves with chemical hand-warmers. I bought these in the fishing department, and I think they will be warmer.
This is a small SUV and we plan to sleep in it as well as work out of it. Every square inch needs to be packed intelligently. We finished this task in the late afternoon and headed to Anchorage on AK 1, Mary driving.
And that’s when all hell broke loose. The car started to misfire and decelerate. “Feel that crosswind,” my daughter said, fighting the wheel. I was baffled, because the trees were standing straight. A moment later, the rear end started swaying like an old cow.  A rear track bar had snapped.
So we sat on an expressway, surrounded by our meagre worldly goods, waiting for AAA. This morning I will go to the shop and explain my troubles. Then I’ll look for a welding fabricator to make a new track bar. 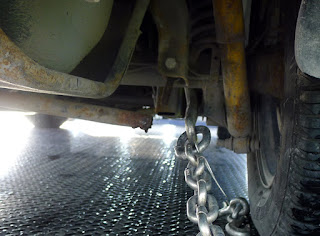 This is what we call “not good.”
I’m only a little worried. OK, I’m a lot worried.
Meanwhile, there was nothing to do but go out to Lucky Wishbone for dinner. This drive-in was founded in 1955 by George and Peggy Brown. She has since passed away; he is now in his 90s and still overseeing his establishment from a centrally-located table.
Modest in design, the place is basically unchanged except for the hundreds of old photos adorning the walls. They serve real malted milkshakes, good burgers and great fried chicken. That included giblets, which our friend promptly ordered and devoured.

Giblets to the left, other parts to the right. Delicious!
I am profoundly grateful that our breakdown happened in Anchorage, where we have friends and the city has good restaurants, garages, and mass transit. That is so much better than being stranded on the Al-Can, munching on beef jerky and praying that someone comes along who can help.
Posted by Carol Douglas at 8:29 AM