Coronavirus has the traveling public aware, alert, and concerned… but nobody’s panicking.
As of this moment, I have been traveling for 28 hours and am still eight hours short of tonight’s destination. It took me about the same amount of time to get around the world to Australia, but that was just two flights. I’m enjoying the airport hopping, since each one has its own character. But at the end of this, I have to get into a car and drive. Here’s praying for a short nap during my next flight.

The Aerolíneas Argentinas (AA) and Virgin Airlines (VA) counters were side-by-side at Miami. “Try not to mention the war,” my husband whispered. It’s been 38 years since the Falklands conflict, and Fawlty Towers jokes have a scarce and shrinking audience. While my sympathies were with Margaret Thatcher in 1982, they were with the Argentines yesterday. Above their ticket counter, VA advertised an upscale business-class called Upper Class, which offended my inner prole.

Meanwhile, AA did everything right, including a free upgrade to an exit row and two real meals in Turista class. Dinner—served with an Argentinian Malbec—was quite good. Meanwhile, on American carriers, the norm is now seven pretzels and a small glass of soda.

So far, the pandemic precautions have been sensible both in the US and here. At Logan, they were dousing surfaces with isopropyl alcohol. The only point at which I was concerned was in the people-mover at Miami; it was as crowded as a Manhattan subway at rush hour. Both American Airlines and AA had large cleaning crews waiting at the gate. The Argentines collected a health dossier and itinerary for each passenger while we were still in the air. They staged us through customs so we weren’t mixed with planes from Madrid and Rome. Some passengers were pulled aside for extra surveillance. And of course everyone, employees and travelers alike, is dousing themselves with hand sanitizer.

The Argentinians are concerned but calm. I asked an agent whether she was worried. “Yes,” she answered with resignation, “but what can I do?”

The Argentinian soldiers patrolling the terminal are wearing white polo shirts, black trousers and a rakishly-angled beret, cut to flatter. I mentioned to Jane Chapin that they look quite dashing compared to American soldiers. “They don’t get paid anything so they have to look good,” she answered.
I’d intended to use this post to announce a show opening in Portland on April 2. Yesterday I received an apologetic note saying the revelry would be delayed due to the pandemic. I’m flattered; Maine Farmland Trust must have expected a large crowd. However, the work is up and ready for viewing at 509 Ocean Avenue in Portland. But in this brave new world, I suggest you call before you go. The number is 207-338-6575. 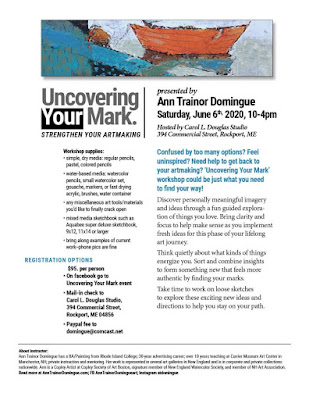 People keep telling me they’re registering for Ann Trainor Domingue’s June 6 workshop, Uncovering Your Mark. If you’re one of them, I suggest you do it soon, because more people have expressed interest than there are seats remaining. Although the flyer says you can mail a check to me, I suggest you pay Ann directly. If you have questions, you can email Ann here or me here, although I don’t know when I’ll be in cell-service range. The workshop is strictly limited to twelve, and there will be no exceptions; there’s no more room in my studio.

Consider applying to Spring Renewal, April 30-June 1. This is the first juried show of the Knox County Arts Society (of which I am the treasurer). You must be a member, but if you summer or live full-time in mid-coast Maine, you should join anyway. Your membership entitles you to a host of benefits including discounted classes, juried show invitations, lectures, get-togethers, and more. Plus, you’re helping to revitalize Rockland’s Art Loft, now known as Studio 9. Contact Karin Strong, membership coordinator, or David Blanchard, president, for more information.

Then go right to the prospectus for Spring Renewal, here, and enter. It’s in the Art Loft, which means you’ll be showing on Main Street in Rockland, one of the hottest art markets in New England. What are you waiting for?
Posted by Carol Douglas at 6:29 AM