An artist, an engineer, and a paint company are working together to repair acid mine damage in southeast Ohio.
Environmentally-ethical choices can be very difficult for the artist. The toxicity of paint rests not in its binders, but in its pigments. Copper, cobalt, cadmium, and lead are the worst. It’s impossible to avoid them completely, but the danger isn’t really to you, it’s to the poor schmoe who has to mine or make them. Most pigments are no longer milled in the US, even when your paint is made here. It’s one of the hidden costs of globalization—we’re better at not polluting America because we just do it elsewhere.

Despite our better environmental record of late, we have some dreadful pollution pits remaining in America. Southeastern Ohio has a long history of coal mining, and it’s unfortunately still visible today, in iron-rich, contaminated runoff from abandoned mines. These coal mines contain the mineral pyrite, which reacts with water and air to form sulfuric acid and iron. This makes the water highly acidic and orange. Of course, this waste doesn’t just stay in downstream creeks and rivers, smothering plant life and animals. It contaminates drinking water as well.
Lower-volume acidic runoff is remediated with a limestone leach bed. Metals are separated and trapped in the bed, and clean water returns to the stream. But there are some sites that are just too massive for this; some release 800 to 1,000 gallons of contaminated water per minute, according to Sunday Creek watershed coordinator Michelle Shively.

Enter two professors from Ohio University: Guy Reifler, civil engineering professor, and John Sabraw, art professor. Instead of trapping and disposing of the iron oxide, they thought, why not dry it and make paint pigment out of it? In 2018, they created a Kickstarter campaign to fund a test program. It raised $33,138. Now they’re proposing to build a full-scale plant that would treat the entire million-gallon-a-day acid runoff from the mine at Truetown in Athens County, Ohio.

It makes perfect sense to reclaim iron oxide that’s been left around by miners; iron oxide was the first pigment; it’s lightfast, safe, cheap and plentiful.

But to process that much water presupposes a market for 5000 pounds of iron-oxide pigment a day. The initial pigment experiments were done by Professor Sabraw; the professors then approached paint-maker Gamblin. It was a good choice; Gamblin has a lengthy interest in environmental sustainability. Among other things, each year they take the pigment powder trapped by the factory’s air cleaner and makes a special batch of paint called Torrit Grey, which they distribute free to their customers. 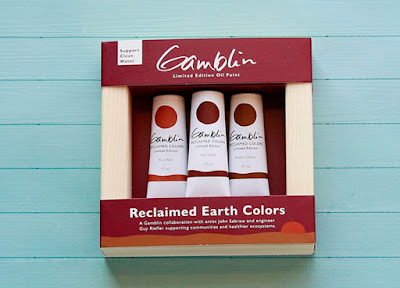 Gamblin took some of Truetown’s pigment and created three colors with it. They’re shortly going to introduce these in a kit called the Reclaimed Earth Colors set, which will retail at $39.99. They will donate 20% of these revenues back to the Truetown project.

Unfortunately, acid water doesn’t just leach iron out of old mines; it can also bring manganese, cadmium, zinc, copper, arsenic and aluminum along with it. I did wonder how well these less-salubrious minerals have been sorted out of the new pigment. And then I stopped and asked myself whether any mined pigment is pure. Probably not.

It’s a good idea, and one I’m happy to support. However, while Carol Jaeger at Salt Bay Art Supply in Damariscotta is the source of this information, I haven’t seen these paints on any shelves yet. As soon as they are, I hope they sell.
Posted by Carol Douglas at 5:19 AM