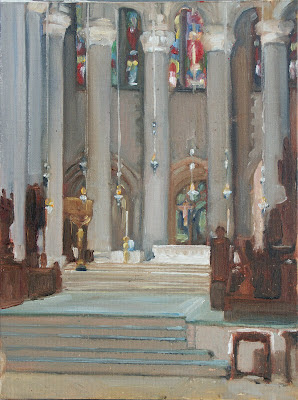 Since Monday was a day of heavy rain, painting outdoors without shelter was out of the question (eventually the paint starts sliding off the canvas). The Cathedral kindly gave me permission to paint inside. I know the Cathedral fairly well, and have always been enthralled by Dutch church interiors (for example, see here, here, and here.)

My husband asked me, “How does it compare to Canterbury Cathedral?” It doesn’t have the patina of a thousand years of continuous use, but in fact it compares pretty well. For example, the stone carvings near the high altar are sensitive and traditional, yet very fresh and lively.

A serious fire swept through the north transept of the Cathedral in 2001, damaging tapestries, organ pipes and stone work. Today, the chancel and choir have been thoroughly cleaned and the great nave (601 feet long) should be finished by this fall. Perhaps this is my only complaint—I wish that in a thousand years, a docent could point high above to the vaulting and say, “These marks are traces of the Great Fire of 2001,” as a memorial to New York’s annus horribilis. For in addition to the World Trade Center cataclysm that year, the second-most-deadly plane crash in American aviation occurred in Queens in November. Although the Cathedral fire was far less important than the other catastrophes, it was etched into stone laid for perpetuity.

The Cathedral is a continual ongoing project. Although the cornerstone was laid in 1892, work has progressed in fits and starts (dictated by finances and two world wars) and is at this time moribund. I am totally charmed by the cinderblock-and-corrugated iron sheds along the south wall, which were built as temporary structures. It takes no effort to see them as wattle-and-daub huts pressed against medieval cathedrals-in-progress.

The light in the Cathedral was very dim, with the nave closed off and the high chancel windows dark on such a dreary day. That made paint mixing difficult, since I was literally guessing at color. Many tourists stopped to visit while I was painting, and I never let on that I was not from Gotham—it would have spoiled their fun.
Posted by Carol Douglas at 3:07 PM

Nice picture on canvas (digitized for our consumptions of course) and perhaps an even better picture in prose (also digitized!). You paint nicely with words. Keep up the good work here.