One more painting I want you to look at

Here is another picture that has been on my mind recently. It’s Sir Stanley Spencer’s The Resurrection, Cookham (1924-27, Tate Britain).

Sir Stanley Spencer is really three painters wrapped into one—a religious with a gentle, sweet view of “the resurrection and the life,” a superlative landscape painter, and a sexually tortured, brutally honest figure painter.

In April I visited the Church of St. Martin in Canterbury, which is England’s oldest parish church in continuous use, founded as the private chapel of Queen Bertha of Kent in the sixth century. As you can imagine, its graveyard is crowded. 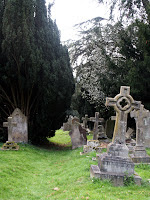 I attended a funeral of a sweet eight-year old boy on Saturday in an old burial ground in rural New York. It doesn’t look that different from the churchyards at St. Martin’s or Cookham. What a comfort to imagine Tyler’s resurrection just as Sir Stanley Spencer saw it.
Posted by Carol Douglas at 2:29 PM

So nice to see more of your work! Thanks for sharing that which God has gifted you with others. I am no artist and have little understanding/appreciation for the wide world of art and am thrilled to find a Christian to expose me to some marvelous works like the Resurrection piece. Nice commentary on the graveyard and what lies ahead for those who believe.

Thanks, John. I am enjoying this a lot more the second time around.