Napoleon I on his Imperial Throne 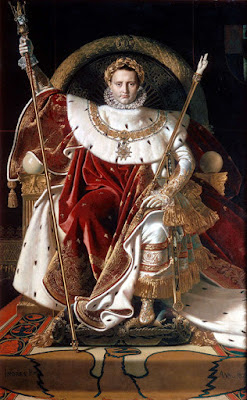 My husband and I saw the show “Citizens and Kings” at the Royal Academy of Art in London. Three months later, the painting which sticks in my memory is Ingres’ Napoleon I on his Imperial Throne (1806).

Most paintings are better seen in life, and this is no exception. The marble ball on the throne simply floated in the dim light of the gallery. Ingres was a superb draftsman and renderer of surfaces (see here and here, for example). In fact his crystalline accuracy is one of many things which annoyed his early critics. 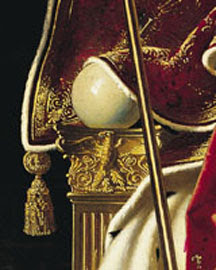 Despite his skill, Ingres was no photorealist. He was, in fact, deeply sympathetic to medieval art, and you can see that in the rigidly symmetrical composition and symbolism of this portrait. Napoleon holds Charlemagne’s own sword and hand of justice to shore up his legitimacy. Compare this to Jacquie-Louis David’s portrait of Napoleon crossing the Alps (1800), here, and David’s portrait of the Emperor when things started going sour (1812), here.

Ingres’ early career was promising. He won the Grand Prix de Rome in 1801, which entitled him to study in Rome on the French government’s tab (the government, however, was too broke to send him until 1806).

This portrait of Napoleon, however, damaged his career. It was shown at the Salon of 1806 to great criticism, including by his painting master David. He was panned for his imagery, harsh color scheme and his cold precision with paint. But what most baffled his audience was his deliberate quotation of pre-Renaissance art.

Ingres was so stung by the criticism that he remained in Italy more or less until 1841. His career was stunted by persistent criticism of his Salon entries over the years. For a while he earned his bread as a street artist doing pencil sketches of tourists.

In addition to the Napoleon portrait, Ingres showed three portraits of the Rivière family at the 1806 Salon. Compare his portrait of Mlle Rivière (1805), below, to DaVinci’s Lady with an Ermine (1485), below that. 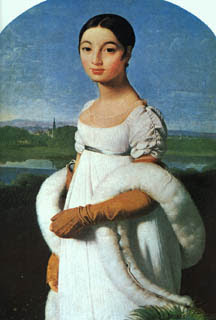 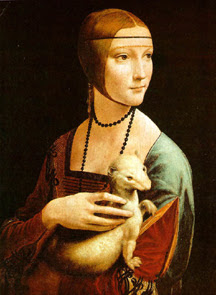 The two portraits above have far more in common than Ingres’ has with his contemporary David’s portrait of Madame Récamier (1800). 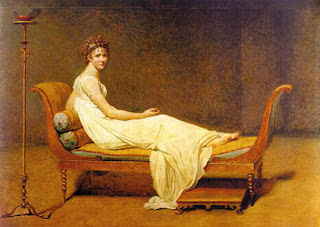 While modern art viewers understand and value this kind of historical reference, it was unappreciated at the beginning of the 19th century. But I am not sure that was why this painting was reviled at the Salon of 1806.

Ingres depicted something ugly and disturbing about Napoleon. He was not the only painter to depict Napoleon in Imperial garb, but to me this portrait walks a fine line between hagiography and caricature. Perhaps Napoleon’s stiff stance makes him seem a bit of a poseur. Perhaps it is the bland arrogance of the expression (probably not painted from life).

To me, Ingres goes someplace dangerous in this portrait. I think the critics lashed out at Ingres in their fear of the Emperor. At the time, it must have seemed like stupidity on Ingres' part. Now it reads as brilliance.