Hey, Carol, what am I supposed to buy for this workshop? 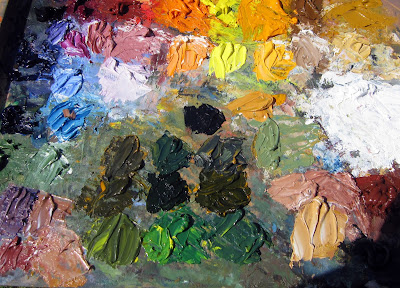 Years ago, I took a figure workshop from a well-known American figure painter. On receiving his supply list, I noted several pigments that are not normally on my palette. Two were transparent earth colors; one was Naples yellow; one was cadmium green. I duly bought them, took the workshop, and came home having never touched them. The transparent earths were occasionally useful for glazing, but that $20 tube of cadmium green sat in my cabinet until it thickened and died.

I never want to do that to anyone. (Not that I'm totally immune to it; my oldest students will remember my infatuation with Payne's Grey back in the day.)

Here are my paint supply lists for both local plein air painting (in Rochester) and workshop painting in Maine this summer:

Nevertheless, there are certain paints I recommend at the expense of others. For example, it never makes sense to buy alizarin crimson. The real thing (PR83) is extremely fugitive,*
so many manufacturers have decided to make “hue” formulations that mimic it. Many of these are either also fugitive and or so high-stain that they tend to bleed up through drying paint. Yet alizarin crimson is a staple in the paintboxes of so-called traditionalists.

How much more sensible it is to buy straight up quinacridone magenta (PR122) and mix it to the color you want when you need it!

Another example is Naples yellow, which was originally made of yellow antimony (PY 41) and is one of the oldest of pigments. Unfortunately, it’s also extremely toxic. There are a million proximates on the market—so called “convenience mixes”—because that dense, chalky yellow is extremely useful in landscape painting. But why carry a convenience mix when you can make up something equally as useful from yellow ochre and white, which both have a million other uses on the palette? (Yes, I know some of you watercolorists take great pride in never using white, but when you use a Naples yellow you’re using white whether or not you admit it.)

On the other hand, there are pigments that make reasonable substitutions. For example, I want oil painters to have a high-stain greenish blue, but phthalo blue cyan (PB15:3) will just do as well as Prussian blue (PB 27) if that’s what you have.

Recently I wrote about hues and the Color Index system. Handprint has a more detailed explanation here. For the sake of efficient painting, I urge you to avoid hues and convenience mixes. Single pigment paints are most efficient in the field.

And if you haven't signed up for my Rochester classes or Maine workshops, what on earth are you waiting for? August and September are sold out for my workshop at Lakewatch Manor in Rockland, ME... and the other sessions are selling fast.  Join us in June, July and October, but please hurry! Check here for more information.

*”Fugitive” just means the pigment fades over time, and real alizarin crimson—an extract of the madder plant—is among the most fugitive pigments of all.
Posted by Carol Douglas at 3:40 PM